"This perfumed Syrah has notes of spicy citrus rind, refined black fruit, violets and lilies. The palate is elegant and restrained yet with plenty body and a silky texture balanced by a fresh, natural acidity. The finish is long with supple tannins. Best served at 16 to 18 °C, this wine will greatly benefit from decanting if drunk within the first 3 to 5 years after bottling." ~ Winery Notes
About Mullineux
Located near the village of Riebeek Kasteel in the Western Cape is a small, highly focused family winery whose wines draw praise from around the globe.

Mullineux & Leeu Family Wines (MLFW) produces hand-crafted wines from the granite and schist based terroirs of the Swartland region of South Africa. The Swartland is a beautiful and wild place of rolling hills with a few significant outcrops of rock that form the Paardeberg, Kasteelberg and Piketberg Mountains. It is not an easy place to establish vines, and it's a region that has as much of an influence on the vineyards and people who farm there as the people have on the land itself.

Roundstone Farm, located on the southwestern slopes of the Kasteelberg mountain, is one of the best areas in the Swartland for growing grapes, thanks to its deep bedrock of schist soils. Acquired by MLFW in 2014, Roundstone Farm serves as the base for both the Mullineux and Kloof Street labels. Here, sustainable, organic farming practices are honored. No herbicides, pesticides or other systemic fungicides are utilized. Soils are nourished from cover crops planted in winter and locally produced organic mulch and compost.

The Mullineux team takes a careful minimalist approach to making wines that express the natural wild spirit of the Swartland. In the cellar, apart from minimal amounts of sulphur, nothing is added to, or removed from the wines. Mullineux uses no yeasts, acids, tannins, enzymes, or fining and filtering agents.

Proprietors Chris & Andrea Mullineux were brought together through love of the land, making wine and each other. Born in Cape Town and raised in Johannesburg, Chris was introduced to the world of wine while studying accounting at the University of Stellenbosch. He enrolled in winemaking for a second degree, and upon graduation, he took a position starting up a boutique organic winery in Tulbagh, where he oversaw the vineyards and cellar for 5 years. In addition to stints at de Trafford and Rustenberg wineries in South Africa, Chris worked harvests at top wineries in Cote Rotie, Bandol, the Languedoc, Roussillon, and California.

A native of San Francisco, Andrea developed her passion for wine at the family dinner table. After studying Viticulture and Oenology at UC Davis and completing a handful of harvests in the Napa Valley, Andrea decided to broaden her winemaking knowledge overseas. After a harvest in Stellenbosch, she went on to work in Chateauneuf, where on the same trip she met Chris at a wine festival in Champagne. Andrea's love for South African wine (and Chris) brought her back to South Africa, where they learned that their compatibility extended into the vineyards and cellar.

In 2013 the winery was renamed Mullineux & Leeu Family Wines when Chris and Andrea joined forces with Analjit Singh, proprietor of Leeu Estates in Franschhoek. Analjit's love affair with South Africa started when he first visited the country with his daughter for the Soccer World Cup in 2010. He took a side trip to the Franschhoek valley and felt a deep connection and sense of place. He subsequently purchased 3 adjacent farms which are now part of his Franschhoek hospitality portfolio, Leeu Collection, under the name Leeu Estates. The Afrikaans word leeu (meaning lion) is the Sanskrit derivation of Singh.
View all Mullineux 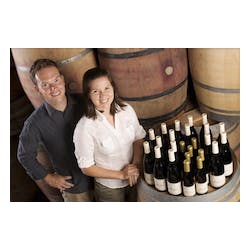 No questions posted yet about this item.
Great Grapes
"Really sad that this is no longer available. We'd buy a case if we only could.."
Posted byLoring on Mar 30, 2018Verified Purchase
Subscribe to our newsletter!