Canberra International Riesling Challenge 96
"Our 2016 Vin de Glaciere grew and was harvested in a warm year that offered tropical fruit aromatics of mango and pineapple. The grapes were picked in late September at 22 Brix and pressed after being frozen, which concentrated the sugar to 35 Brix. The fermentation was arrested at 178 g/L with 10.5% acquired alcohol producing a refreshing style. One hundred percent fermented and aged in stainless steel, preserved the fruit intensity."

View all from Pacific Rim 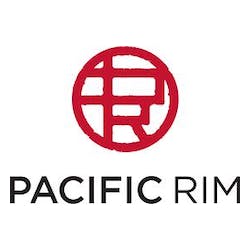 Pacific Rim Winemakers is a Washington winery owned by Randall Grahm (also owner of Bonny Doon Vineyard in California).[1] Pacific Rim's winery is located in West Richland (Tri Cities area in Eastern Washington) and specializes in Riesling. The wines have been produced since 1992 by Randall Grahm himself and more recently (since the 2006 vintage) by Nicolas Quillé. Pacific Rim produces principally Riesling from Dry to dessert style (seven Riesling in total including several single vineyard sites in the Columbia Valley) and also small amounts of Gewurztraminer and Chenin blanc.[2] In 2011, Banfi Vintners bought the company for an undisclosed amount and is now run by long-time employee Nicolas Quillé as a general manager and head winemaker.