View Cart / Checkout
Loading... Loading cart
Total:
—
View Cart / Checkout
0
Cart
Delivery
Search
Menu
Home » Wine » Pink/Blush Wine » Rose » Planeta Rose 2021
17%
OFF Sample Image Only
Planeta Rose 2021
$14.40 $11.95
Ship "12" Free when you mix or match a 12 bottle case! more...
Planeta Rose 2021 ships free when purchased by the 12 bottle case! — Fill a 12 bottle case with this item or any of our other eligible free shipping items, and that case ships for free! Note that there is no limit to the number of cases you can have shipped for free so long as they are filled with eligible "Ship 12 Free" items.
Vinous Media 91
The 2021 Rose wafts up with a perfumed bouquet of freshly-cut roses, wild strawberries and wet stone. Its silky and pliant in feel with a savory, salty mix of mineral-tinged apples and pears that give way to pretty inner florals. The 2021 lasts incredibly long through the finish, recalling all of the fruit and flowery notes from its nose and palate. This stunning glass of Rose is an equal  ... read more

store shelf 12 Free
Vinous Media vm 91
Winery: Planeta
Category: Rose
Size: 750mL (wine)
Alcohol by vol: 12.5%
Closure: Screw Cap
Item ID: #46804
Location at store: 64b,81d
Region: Italy » Sicily
Other Similar Items
$16.95 WE 93
Chateau de Trinquevedel Tavel Rose 2021
$16.95 WE 93
Chateau Vignelaure Provence Rose 2021
$12.95 VM 92
Mas de Gourgonnier Rose 2021
$13.95 D 92
Aime Roquesante Rose 2021
$8.95 JS 92
Charles Smith 'Vino' Sangiovese Rose 2021
$13.95 VM 91
E. Guigal 'Rose' Cotes du Rhone 2021
$12.95 WW 91
Unshackled by Prisoner Wine Co Rose 2019
$14.95 WE 91
Daou Rose 2021
$12.95 VM 91
Tormaresca Calafuria Rose 2021
$7.95 WW 90
La Vieille Ferme Rose 2021
$10.95 WE 90
Chateau Montaud Provence Rose 2021
$12.95 WE 90
Les Lauzeraies 'Tavel' Rose 2021
Information
Questions
Size / Vintage Options
Reviews
Item Description
Vinous Media 91
The 2021 Rose wafts up with a perfumed bouquet of freshly-cut roses, wild strawberries and wet stone. Its silky and pliant in feel with a savory, salty mix of mineral-tinged apples and pears that give way to pretty inner florals. The 2021 lasts incredibly long through the finish, recalling all of the fruit and flowery notes from its nose and palate. This stunning glass of Rose is an equal parts blend of Nero dAvola and Syrah.~E.G.
About Planeta
Planeta's plan of action has been stimulated by the six wineries and the 370 hectares of vineyard which surround them. Patient and careful research, never hurried, looking as much to the past as to the future. Above all with profound links to the oldest winemaking traditions of Sicily and its unparalleled wealth of indigenous grape varieties. The guidelines of the plan are extremely rigorous in this direction; to promote the characteristics of these great vines by cultivating them exclusively in their respective selected areas: Nero d'Avola in Noto or Vittoria; Grecanico in Sambuca and Menfi, Carricante on Etna, and so on.

Alessio, Francesca and Santi Planeta established the company and this plan of action, but the whole family is with them, rooted in the reality of Sicilian agriculture for generations. A family and a company which has always given themselves ambitious aims, following the dictate of quality, a rigorous respect for the environment and for social responsibility. From the family properties at Menfi and Sambuca di Sicilia, and then at Vittoria and Noto to the latest acquisitions on Etna, a single Journey, through Sicily and its greatest wines.
View all Planeta 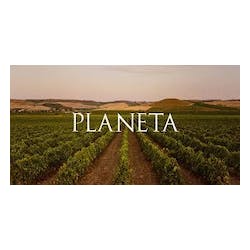