Ship "12" Free when you mix or match a 12 bottle case! more...
Poggio Scalette Il Carbonaione 2018 ships free when purchased by the 12 bottle case! — Fill a 12 bottle case with this item or any of our other 400+ eligible free shipping items and that case ships for free! Note that there is no limit to the number of cases you can have shipped for free so long as they are filled with eligible "Ship 12 Free" items.
James Suckling 97
“Intense aromas of blue fruit, lavender and violets. Some sandalwood, too. Full-bodied with firm, silky tannins and beautiful fruit. Really racy and refined with excellent length. Drinkable now, but a few years of bottle age will make it even more beautiful. Try after 2023.”

James Suckling 97
“Intense aromas of blue fruit, lavender and violets. Some sandalwood, too. Full-bodied with firm, silky tannins and beautiful fruit. Really racy and refined with excellent length. Drinkable now, but a few years of bottle age will make it even more beautiful. Try after 2023.”

Vinous Media 96
“The 2018 Il Carbonaione is one of the most elegant editions of this flagship wine I can remember tasting. Il Carbonaione is usually a rich, bombastic wine, but the 2018 is sleek, gracious and remarkably refined. The fruit was picked a week later than originally planned because of a family emergency. That results in an exotic Carbonaione that is beguiling but not at all heavy. I can't wait to see how it ages.”

View all from Poggio Scalette 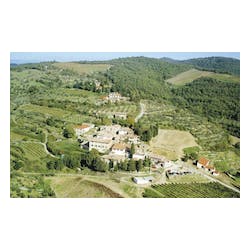