Item Sold Out
Notify me when this item is available
While this item isn't currently available:
Wine Enthusiast 91
"Despite the modest price, this blends fruit from some excellent Willamette Valley vineyards, including Olsen and Hyland. Its dark fruited, and the tannins are a little grainy, with broad flavors of espresso. Black cherry fruit comes out as the wine opens up and breathes, with accents of cinnamon."

Wine Enthusiast 91
"Despite the modest price, this blends fruit from some excellent Willamette Valley vineyards, including Olsen and Hyland. Its dark fruited, and the tannins are a little grainy, with broad flavors of espresso. Black cherry fruit comes out as the wine opens up and breathes, with accents of cinnamon."

View all from Portlandia 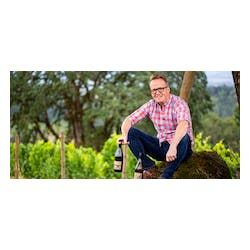 Portlandia began with a journey, one of the longest roadtrips in the United States – Florida to the Pacific Northwest. It was 1999 and Damian Davis had embarked on the cross-country trek for a new job in the tech industry. While en route, he found himself in the Willamette Valley during harvest and decided to stop for a quick wine tasting. By the time he reached his new home, his car was so loaded with bottles that he barely made it.

After that, the pull of Oregon's wine country was persistent and mesmerizing. With its rolling green hills, iron-rich soils and cooling ocean breezes, Damian found the Willamette Valley to be a Pinot lover's dream and the "most beautiful ag-land I had ever seen". He was smitten. So much so that he left his tech career to pursue a new start in the wine industry. And in 2008 he founded Portlandia.

The vision was simple – to create delicious Pinot Noir and Pinot Gris, all while having fun and not paying too much. That mission has guided the wines since the beginning, and we're fortunate to work with passionate grower partners who support these goals through their meticulous care of their vineyards. The results are Pinots that showcase the best of the Willamette Valley vintage after vintage. These are wines made to be enjoyed and to enhance the everyday, guided by our life philosophy: Play Hard. Work Later.