Item Sold Out
Notify me when this item is available
Wine Advocate 94
"The 2017 Chardonnay opens with a bang, offering warm, welcoming scents of peach cobbler, pastry, honey-drizzled apples, honeysuckle, crushed stone, warm hay and a minerally hint with baking spice notes. Light to medium-bodied, it's slowly giving up all that generous spicy fruit in the mouth, with lovely chalky texture, tangy acidity and a long, layered finish. Yowza!"

The Wine
- Blend of fruit predominantly from Wenzlau; leased and farmed by Racines
- Native yeast fermentation in ... read more

The Wine
- Blend of fruit predominantly from Wenzlau; leased and farmed by Racines
- Native yeast fermentation in a combination of tank and 500L puncheons
- Aged for 18 months in French oak (17% new) & 6 months in stainless steel
- 681 cases produced

The Estate
acines is a brand-new project from Justin Willett, co-founder of Lieu Dit, with Étienne de Montille of Domaine de Montille in Burgundy and Rodolphe Péters of Pierre Péters in Champagne.

"Rajat Parr was here tasting in 2012," Willett explains. "He's been a friend for a long time. He said he liked the wines and that Étienne de Montille would be visiting soon, so he set up a tasting. It was great, and Étienne and I stayed in touch. A few years later, I was in Burgundy and I tasted with de Montille's cellar manager Brian Sieve. We were like long-lost brothers—it's crazy how much we have in common. So, I had found a professional buddy, someone to fire stuff back and forth with during the vintage. It was a winemaker's dream. Later, Brian and Étienne approached me and said they wanted to do a project in the US and was I interested? I was coming up in wine, and there was no other producer from Burgundy that I drank more than Domaine de Montille. I said, okay, but come here because you think this is the spot, not because you think it's convenient or because we already have a relationship. So, they came here in 2016 and stayed a month, traveling around the West Coast. After that, they said, we want to be in Sta. Rita Hills and we want to be partners with you. It was a dream for a young winemaker like me. Étienne is a good friend of Rodolphe Péters, who wanted to start a sparkling wine venture in the US. So, in 2018 we started making sparkling wine. The three of us have just acquired a property in Sta. Rita Hills that we are developing. 2017 is the first vintage of this new project."

View all from Racines 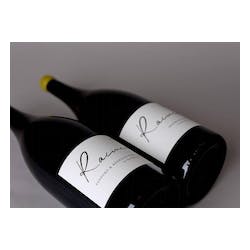 Racines is first a collaboration--the creative and rigorous output of four great voices of wine. Justin Willett of Tyler Winery has been joined in his home appellation, the Sta. Rita Hills, by Étienne de Montille and Brian Sieve of Domaine de Montille and our own Rodolphe Péters of Pierre Péters. Together, they are marrying the time-honored techniques of Burgundy and Champagne with the pioneering energy of California--and, in the process, they are rediscovering the nuances of the appellation's most iconic vineyards.

Following the consolidation of Domaine de Montille, a family estate that dates back to the 1730s, Étienne de Montille looked to California, eager for an opportunity to engage new terroir with Pinot Noir and Chardonnay as his lens. In 2016 he set off on a month of travel among the state's myriad appellations, meeting their winemakers, tasting their wines. In short order it became apparent that the promise he was seeking lay in the Sta. Rita Hills--and the partner for such ambition was already there.

By 2016 Justin Willett, a son of Santa Barbara and career winemaker, had over a decade of experience coaxing forth the character of the region's best vineyards. Étienne and Justin turned to compelling vineyard blocks that Justin had long coveted, and together they have presented refreshing new entries in the most important discussions of the appellation. And then, of course, there's Rodolphe Péters. In 2018, Rodolphe joined Racines in deepening their understanding of Sta. Rita Hills Chardonnay. Their first sparkling wines, now en tirage, are likely to debut in late autumn.

What's more, in addition to the quick work they've made of benchmark sites – from Bentrock to Sanford & Benedict – Racines has leased the Wenzlau Vineyard and embarked on replanting its upper blocks. They have also purchased land adjacent to the Tyler estate vineyards. Planting here will commence this spring and continue in the spring of 2021.

The wines here possess more structure and resonance than encountered in Tyler's ethereal approach. New cooperage and custom vats, tailored to Étienne's technique, have been imported. The Pinots are composed using further stem inclusion, more extraction, and longer vatting. The Chardonnays are raised with more finessing of the fine lees and longer élevage. The results are immediately apparent in the glass: these are tensile and crystalline expressions of the Sta. Rita Hills– at once familiar and rendered anew.