100 Prieto Picudo very old vines in stony clay at high altitude (800m ASL) fermented with indigenous yeasts in stainless steel macerated to the sangrado color typical to the region surrounding Len - raised on the fine lees for four months in tank bottled without fining or filtration The first ros ever produced by Ral Prez! The plateau south of Len was historically a source for ross, though they are rarely seen in the United States

The Estate
Ral Prez Pereira is universally considered to be one of the worlds most visionary winemakers. Since he produced his first vintage for his familys winery in 1994 at the age 22, he has been in the forefront of the conversation about what has been called The New Spain. In 2005, he left his family business to strike out on his own, creating Bodegas y Viedos Ral Prez, which quickly became the point of reference for the Bierzo appellation. In the intervening years, he has expanded his sphere of activity to include the appellations of Ras Baixas, Ribeira Sacra and Tierra de Len, but his heart and his home remain in Valtuille de Abajo, the village in Bierzo where his family has been tending vines for well over 300 years.

In addition to numerous other accolades, Ral was named Winemaker of the Year by German publication Der Feinschmecker in 2014 and Best Winemaker in the World for 2015 by the French publication Bettane+Desseauve. In the February 2018 Decanter, Master of Wine Pedro Ballesteros wrote, Ral Prez is the archetype of the intuitive winemaking genius. A picture of Ral in that same article is captioned, Is this the best winemaker in the world? Ral would certainly not self-apply any of these superlatives. In fact, his genius is far exceeded by his humility and generosity of spirit. That humility comes through in his wines. These are not winemaker wines so much as they are unadulterated expressions of the villages and vineyards from which they hail. 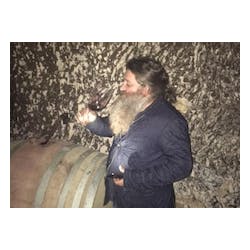 Raúl Pérez makes wine in several different regions of Spain's northwest, but he makes his home (and some of his finest wines) in Bierzo. The wines in the Ultreia series follow the Burgundy model: a pair of entry-level "village" wines from multiple sites and then a collection of single-vineyard expressions. The majority of these vineyards are located in the village of Valtuille de Abajo, where the Pérez family has lived and worked for generations.

Also included under the Bodegas y Viñedos Raúl Pérez label are some wines from outside of Bierzo. His two most coveted (and limited) red wines, El Pecado and La Penitencia, hail from the Amandi zone of the Ribeira Sacra D.O. There are also two wines that correspond to the Tierra de León D.O., a white from the Albarín grape (not Albariño) and a red from Prieto Picudo.

The final wine in this collection is Sketch Albariño, undoubtedly Raúl's most famous bottling. Contrary to popular belief and, indeed, some reports in major media outlets, this wine is not aged underwater. It is, however, one of the finest white wines produced in Spain, and demand for it always outpaces supply.