$8.95
4.7 of 5 (15 reviews)
"The Blue Spotted Salamander (Ambystoma laterale) is an occasional visitor to the Finger Lakes. Just as seeing one of these beautiful creatures is a treat, so are frequent encounters with this wine. Semi-sweet,crisp and elegantly fruity, it can be past of a relaxing afternoon or lively evening. It truly is enjoyable on its own or with light foods such as fruits, salads and cheeses." ~ Winery notes

"The Blue Spotted Salamander (Ambystoma laterale) is an occasional visitor to the Finger Lakes. Just as seeing one of these beautiful creatures is a treat, so are frequent encounters with this wine. Semi-sweet,crisp and elegantly fruity, it can be past of a relaxing afternoon or lively evening. It truly is enjoyable on its own or with light foods such as fruits, salads and cheeses." ~ Winery notes

View all from Red Newt Cellars 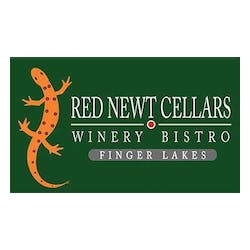 Red Newt Cellars is located on the east side of Seneca Lake in the hamlet of Hector in the Finger Lakes region of New York. Red Newt Cellars was founded in 1998 by David and Debra Whiting. Wine production was started with the 1998 vintage with a mere 1,200 cases of Chardonnay, Riesling, Vidal, Cayuga, Cabernet Franc, Cabernet Sauvignon and Merlot. The first white wines were released at the grand opening of the winery and restaurant in July of 1999.

Debra and David have received recognition from local and regional press as well as from national publications such as Food and Wine, Nations Restaurant News, and Wine Spectator. Recently, Red Newt Cellars has been named among Wine & Spirits Magazine’s 2011 Top 100 wineries of the year. The Wine Spectator describes David and Debra as “untrammeled lovers of the Finger Lakes scene,” and it couldn’t be more true. David and Debra Whiting met in the late 1980s. At that time David was working as cellar master at a Finger Lakes winery while Debra was supervising microbiology labs at Cornell University. Following a passion for food and wine, David continued his oenological career as winemaker at three different wineries in the Finger Lakes. Debra’s path led her into a gourmet cheesecake business and then an upscale catering business. When the opportunity arose in 1998, David started wine production with the 1998 vintage and the following summer Debra opened the Red Newt Bistro concurrent with the first wine releases in June of 1999. Red Newt Cellars represented the achievement of David and Debra’s longtime goal to combine their efforts and expertise in the exploration of regional wine and cuisine. Their focus was on not only producing exceptional wines and food, but also creating a synergy between them.

"Adult grape juice without the acidity!! It's a must try and I promise it will be your new favorite!!"

"When my friends and I visited the Finger Lakes region 5 years ago, we stopped at Red Newt Cellars. Not only did we fall in love with the wines, but the restaurant as well. Kudos to the wine master for having such wonderful wines."

"I wish I could buy this wine locally! It's my new favorite!"

"When I used to get up to the Finger Lakes on a regular basis I made sure we'd stop in at the Red Newt Winery for their "Blue Newt White". Everyone who has tried this wine love it. Nice to have a store that ships to my state. I would still drive the 720 mile round trip for this wine."

"Ever since I tried this wine, it has become my favorite. It is sweet, tasty, and refreshing. Love it!"

Such a light fun wine to enjoy over dinner

"This wine is a great summer afternoon refresher! It's sweet tastes goes excellent with Sunday brunch, with a quiche, hash browns and fruit bowl....enjoy this light fruity wine!!"

"Way too sweet. If you like cotton candy you will love this wine. I wonder if I got a bad bottle. I dumped it after I tasted it over 2 consecutive days. I usually drink Pinot Grigio, Chardonnay or blends. I knew it would be sweeter, but never tasted any wine as sweet as this."

C on Nov 24, 2021  [Verified Purchase]
View more reivews
Scroll to the top of this page