Item Sold Out
52% Cabernet Sauvignon, 44% Merlot, 4% Malbec
2018 was a tremendous vintage in the Napa Valley and this new red wine cuveé shows all of the deep color, structure and complexity that one might expect from Howell Mountain. The generous portion of Merlot in the wine allows for a velvet, supple mouthfeel to go with the exotic nose, but make no mistake, this is a Bordeaux Blend from Howell Mountain with the ability to improve for ... read more
Item ID: #38550
Winery: Robert Craig
Category: Red Blends
Region: California » Howell Mountain
Size: 750mL (wine)
Closure: Cork
Share this item on FacebookFollow Empire Wine on TwitterFollow Empire Wine on Pinterest

52% Cabernet Sauvignon, 44% Merlot, 4% Malbec
2018 was a tremendous vintage in the Napa Valley and this new red wine cuveé shows all of the deep color, structure and complexity that one might expect from Howell Mountain. The generous portion of Merlot in the wine allows for a velvet, supple mouthfeel to go with the exotic nose, but make no mistake, this is a Bordeaux Blend from Howell Mountain with the ability to improve for decades in the cellar if called upon to do so. ~winery notes

“It is my pleasure to offer a limited production of the greatest $50 wine to ever be released in the Napa Valley: the 2018 Howell Mountain Cuvée (HMC). HMC is a predominately Cabernet blend that includes Merlot and Malbec from young vines on the Candlestick Vineyard at the top of Howell Mountain. This wine spent a little less time in new barrels than our $110/bottle Howell Mountain Cabernet, and is being released earlier, but it has markedly similar quality and pedigree." ~Elton Sloan, Owner

CANDLESTICK RIDGE ESTATE VINEYARD, HOWELL MOUNTAIN
Just down the road, Candlestick Ridge is the northernmost vineyard in the Howell Mountain AVA and is slightly warmer than the summit ridge where the Winery Estate vineyard lies. Candlestick is influenced by warm air from Pope Valley to the east and – at its slightly lower elevation – it is protected from the constant wind that hits the ridge line. The big subsurface boulders were removed during the replanting, leaving thin tufa soil on top of a rocky volcanic bedrock.

View all from Robert Craig 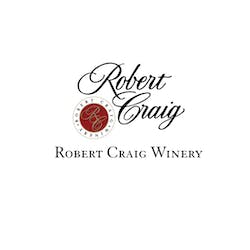 "Nothing gives me greater pleasure than to be in mountain vineyards, where the true character of a great Cabernet Sauvignon emerges from the distinctive soils and climate of those high elevations." ROBERT CRAIG Vintner Emeritus

Founded in 1992, Robert Craig Winery is situated along the summit ridge of Howell Mountain at 2,300 feet of elevation. We specialize in small-lot, mountain grown cabernets that feature their shy bearing growing sites in the finished wines. In conjunction with our winery's neighboring vineyard parcel, we own more than 100 acres of Howell Mountain property and farm 35 planted acres there of the finest cabernet variety vineyards anywhere in the world. In addition to the two Howell Mountain vineyards, we own and farm 17 acres of hillside vineyard for our Affinity Cabernet in southern Napa Valley on the lower slopes of Mount George. We also produce a small amount of Mount Veeder, Spring Mountain District, and Diamond Mountain District cabernet from tremendous vineyards in those respective AVA's, each of which is situated above 1,850' in elevation.
Our winery founder, Robert Craig, has been farming mountain cabernet in the Napa Valley since 1980, and he was a key player in the formation of the Mount Veeder and Spring Mountain AVA's. In this tradition, our small winery continues to produce complex, cellar-worthy cabernet sauvignons from mountain vineyard sites in the Napa Valley. Each successive vintage gives us an opportunity to honor these rare growing sites and Bob Craig's pioneering efforts to introduce people around the world to the unique intensity of mountain grown cabernet sauvignons from the Napa Valley.

For Robert Craig, winemaking always begins with the vineyards -- more specifically, with his belief in the crucial importance of vineyard location in producing wines of tremendous depth and character.

By concentrating on small quantities of wine from distinctive Napa Valley mountain vineyards, he has been able to create wines that reflect the impact of "terroir," or the combination of soils, climate and viticultural characteristics of the growing locale.

Our winemaking philosophy builds upon the best that the winegrowing appellation has to offer. The goal is to let each wine's special personality and unique qualities shine through.