Item Sold Out
Notify me when this item is available
While this item isn't currently available:
Wine Spectator 90
A smoky beeswax note accents the core of apricot, ginger and pear flavors in this white, with hints of green tea and dried honeysuckle. Finds harmony on the finish, where a crisp thread of acidity emerges.-WS

In the now classic style that awoke a passion for sauvignon blanc in the U.S. decades ago, the 2017 Fum Blanc displays aromatic, white summer peaches with juicy Meyer lemon citrus, tangerine zest and a hint of gooseberry ... read more

Wine Spectator 90
A smoky beeswax note accents the core of apricot, ginger and pear flavors in this white, with hints of green tea and dried honeysuckle. Finds harmony on the finish, where a crisp thread of acidity emerges.-WS

In the now classic style that awoke a passion for sauvignon blanc in the U.S. decades ago, the 2017 Fum Blanc displays aromatic, white summer peaches with juicy Meyer lemon citrus, tangerine zest and a hint of gooseberry in each refreshing, mouthwatering sip.
Blend: 85 Sauvignon Blanc, 15 Semillon-Winemakers Notes

Born to a French family in Morocco and raised in France, Genevieves formal wine education began under the tutelage of the legendary three fathers of modern enologyJean Ribereau-Gayon; his son, Pascal Ribereau-Gayon; and Emile Peynaudwith whom she studied at the University of Bordeaux, France. After receiving her National Diploma of Enology 1974, she returned to her familys vineyards in Corsica and France, which she managed from 1974 to 1977. Concurrently, she also owned and operated her own enology laboratory in Provence and served as consulting enologist to many French chateaux in the mid-seventies. Drawn to Robert Mondavi Winerys philosophy in winemaking and winegrowing, Genevieve moved to the Napa Valley in 1978. She recognized in Robert Mondavi her fathers holistic approach to quality. It starts with the earth, the legacy of what she had received from her ancestors and what she was going to leave for the future generation, she says. We must work to maintain the land, to grow so that we all live in symbiosis: the earth, the vines, the peoplecare creates quality. From 19781979, she fully absorbed this philosophy, working at Robert Mondavi Winery as a lab enologist and an assistant enologist. Deeply interested in the winemaking revolution taking hold in the state, Genevieve continued exploring California for the next decade, holding several consulting positions. Genevieves connection to Robert Mondavi returned in 1989, when she became Director of Production at Opus One Winery. Then, in 1997, she came full circle as the Director of Winemaking at Robert Mondavi Winery.-Winery Notes

View all from Robert Mondavi Winery 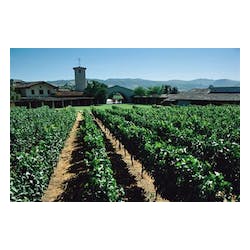 "Walking through To Kalon, admiring its contours and vines, smelling the richness of its soil, I knew this was a very special place. It exuded an indefinable quality I could not describe, a feeling that was almost mystical."

Robert Mondavi established his namesake winery in 1966 with a vision to create Napa Valley wines that would stand in the company of the world's finest. He chose To Kalon Vineyard in the heart of the Napa Valley as the home for Robert Mondavi Winery. This first-growth vineyard, located in Oakville, California, is renowned for producing some of the finest Cabernet Sauvignon wines in the world, as well as for its Sauvignon Blanc grapes, from which Mr. Mondavi crafted his signature wine, Fumé Blanc.

Along with To Kalon Vineyard, Robert Mondavi Winery sources grapes from some of Napa Valley's finest vineyards, including Stag's Leap (Cabernet Sauvignon and Sauvignon Blanc) and Carneros (Pinot Noir and Chardonnay).

Mr. Mondavi believed that wines should reflect their origins, that they are the product of the soil, the climate, and the careful stewardship of those precious resources. He also believed in combining the newest techniques and technology with time-honored winemaking traditions.

Our winemaking and vineyard teams are proud to carry on our founder's mandate to always strive higher, to pursue Robert Mondavi's goal of excellence with the same passion and innovative spirit, moving forward with programs that break barriers and open new frontiers.

WLeading this initiative is Genevieve Janssens, Director of Winemaking. Genevieve, whose relationship with the winery began in 1978, was selected Winemaker of the Year by Wine Enthusiast in 2010.

We are located at 7801 St. Helena Highway in the town of Oakville at the edge of the To Kalon Vineyard.