Wine Enthusiast 91
This wine is delicious but subtle as it weaves tempting notes of raspberry and cream with toasted nut and baked bread nuances that provide complexity and layering. It has both a vivid crispness and a subtle smoothness that coats the mouth and ... read more

Wine Enthusiast 91
This wine is delicious but subtle as it weaves tempting notes of raspberry and cream with toasted nut and baked bread nuances that provide complexity and layering. It has both a vivid crispness and a subtle smoothness that coats the mouth and helps the finish linger. Jim Gordon, 11/1/2019

Wall Street Journal Good/Very Good. "Despite the Brut in the name, we'd recommend this to people who prefer their bubblies a little sweeter and softer than most. Relaxed and relaxing and quite approachable. Good as an aperitif or with cookies, so maybe it's just the thing for a noon inauguration."

"Stylistically, Mirabelle Brut has an elegant, toasty aroma, which leads into crisp and complex flavors on the palate. It is impossible to mistake Mirabelle?s Northern California heritage - the freshness on the mid-palate continues through to the finish. Mirabelle Brut pairs well with fish and shellfish, light appetizers and pasta." ~ Winery notes

View all from Schramsberg 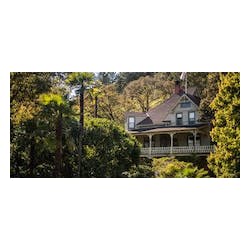 Schramsberg's history dates back to the 19th century, when German immigrant Jacob Schram first made his home and started his winery on Diamond Mountain.

Over one hundred years later Jack and Jamie Davies would restore the Schramsberg estate in 1965. They set out to produce sparkling wine – specifically, "America's most prestigious, select and admired sparkling wine; chosen for special guests, special gifts, pampering one's self and expressing one's taste in unique products." Through the decades, this spirit of innovation earned Schramsberg and the Davies worldwide praise and recognition.

Schramsberg has also played a role in world history. The Blanc de Blancs was used for President Nixon's 1972 "Toast to Peace" with China's Premier Zhou Enlai (see timeline). Schramsberg's sparkling wines have been served at official State functions by every U.S. Presidential administration since.

Schramsberg's founders, Jack and Jamie Davies were determined to seek out a simpler, more meaningful life. In 1965, after a yearlong search, they discovered a run-down winery on the mountainside above St. Helena. The 19th century Victorian mansion presided over the tangled remains of once stately gardens and underground cellars. The historic Schramsberg property had been abandoned for years, but the Davies were looking for a challenge. On that day they decided Schramsberg would be brought back to life.

The Davies had an ambition to make wine, but not just any wine. They were setting out to produce a world-class sparkling wine, and it was a lofty goal. Later that year, the 1965 Blanc de Blancs came to be, and would be the first commercial use of Chardonnay in American sparkling wine.

Schramsberg sparkling wines are produced from Pinot Noir and Chardonnay grapes grown in a broad array of cool-climate North Coast vineyards located in Napa, Mendocino, Sonoma and Marin counties. The winemakers draw from more than 110 individual vineyard sites to create over 250 base wines each year. These wines are then artfully blended to create Schramsberg's 12-14 distinctive sparkling wines each year.