View Cart / Checkout
Loading... Loading cart
Total:
—
0
Cart
Delivery
Search
Menu
Home » Wine » Red Wine » Shiraz / Syrah » Tensley 'Colson Canyon' Syrah 2021
31%
OFF Sample Image Only
Tensley 'Colson Canyon' Syrah 2021
$57.60 $39.95
Ship "12" Free when you mix or match a 12 bottle case! more...
Tensley 'Colson Canyon' Syrah 2021 ships free when purchased by the 12 bottle case! — Fill a 12 bottle case with this item or any of our other eligible free shipping items, and that case ships for free! Note that there is no limit to the number of cases you can have shipped for free so long as they are filled with eligible "Ship 12 Free" items.
Vinous 94-96
The 2021 Syrah Colson Canyon Vineyard is one of the highlights among the 2021s I tasted from Joey Tensley. Vibrant and driving in feel, the Colson Syrah is endowed with tremendous character. Blue/purplish fruit, gravel, incense, menthol and lavender all take shape as the 2021 shows off its striking beauty. There is so much to look forward to.

Jeb Dunnuck 93-95+
From a site located in the hills above Los Olivos, the 2021 Syrah Colson Canyon Vineyard gives up a dense purple hue as well as notes of jammy blueberries, black cherry liqueur, candied violets, and black pepper. This is a concentrated, medium to full-bodied, powerful Syrah that has terrific tannins as well as good acidity.
About Tensley Vineyard
In 1998, Joey Tensley launched Tensley Wines, a winery in Santa Barbara County, where the mountain range runs from east to west. Eager to let the vineyard speak for itself, Joey produces vineyard designated Syrah wines that from day one, have been well received on the market. For his first vintage, Joey produced 100 cases, while serving as the assistant winemaker at Beckmen Vineyards, where he was given space to launch his own label.

Thirteen years later, Tensley currently produces 3,300 cases a year. Taking advantage of the many micro-climates that the Santa Barbara mountain range provides, Joey cultivates his Chardonnay and Pinot Noir in areas that are close to the ocean, while growing his Rhone varietals--Syrah, Grenache, and Viognier--further inland.
View all Tensley Vineyard 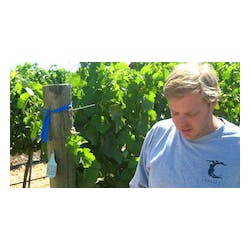