Item Sold Out
Notify me when this item is available
Grillo: 45%, Catarratto: 45%, Chardonnay: 10%
"Grillo and Cataratto grapes give this wine fresh Mediterranean scents and a savory, elegant flavor with a typical hint of bitter almonds. Piano Maltese is yellow-gold in color with a rich fruit driven nose. On the palate it is rich yet fresh with apple, pear, herb and a touch of roasted nut." ~winery notes
Item ID: #22160
Winery: Tenuta Rapitala
Category: Italian White
Size: 750mL (wine)
Closure: Cork
Other vintages
Share this item on FacebookFollow Empire Wine on TwitterFollow Empire Wine on Pinterest

Grillo: 45%, Catarratto: 45%, Chardonnay: 10%
"Grillo and Cataratto grapes give this wine fresh Mediterranean scents and a savory, elegant flavor with a typical hint of bitter almonds. Piano Maltese is yellow-gold in color with a rich fruit driven nose. On the palate it is rich yet fresh with apple, pear, herb and a touch of roasted nut." ~winery notes 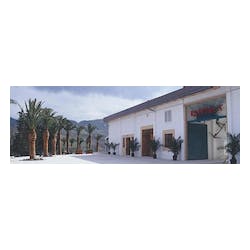