Ship "12" Free when you mix or match a 12 bottle case! more...
Terres Dorees Beaujolais Nouveau 2021 ships free when purchased by the 12 bottle case! — Fill a 12 bottle case with this item or any of our other 400+ eligible free shipping items and that case ships for free! Note that there is no limit to the number of cases you can have shipped for free so long as they are filled with eligible "Ship 12 Free" items.
100% Gamay. The Terres Dores L'Ancien vines are Jean Paul's oldest vines at 40-60 years old. They grow on the sandy clay-limestone hills in his home village of Charnay in the southern Beaujolais and yield small, thick-skinned berries. The farming is organic and harvest manual. The earliest harvest of these vines goes into his Nouveau. Unlike any other Nouveau out there, there is no carbonic maceration (true for all of his Gamays). The bunches are ... read more

100% Gamay. The Terres Dores L'Ancien vines are Jean Paul's oldest vines at 40-60 years old. They grow on the sandy clay-limestone hills in his home village of Charnay in the southern Beaujolais and yield small, thick-skinned berries. The farming is organic and harvest manual. The earliest harvest of these vines goes into his Nouveau. Unlike any other Nouveau out there, there is no carbonic maceration (true for all of his Gamays). The bunches are destemmed, the fruit crushed and fermented with native yeasts in tank, notably with no chaptalization; it is aged briefly, though longer than most Nouveaux, and bottled in time to land in the states by the third Thursday in November.

View all from Terres Dorees 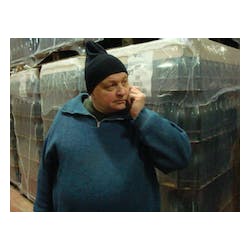 The Domaine des Terres Dorées is a 40-acre estate owned and run by Jean-Paul Brun, located in the Southern Beaujolais just north of Lyons in a beautiful area known as the "Region of the Golden Stones". Brun has attracted the attention of the French and American press for the wonderfully fruity and delicate wines he produces; he wants to make "old-style" Beaujolais. Brun's wines are made to be pleasurable- light, fruity and delicious- not artificially inflated wines that shine at tasting competitions. These are wines for people who like natural Beaujolais.

He believes that the charm of the Gamay's fruit is best expressed by the grapes' indigenous yeast, rather than by adding industrial yeast. Brun's view is that Beaujolais drinks best at a lower degree of alcohol, and so there is no need to systematically add sugar to the must (chaptalize) to reach alcohol levels of 12 to 13 degrees. With that in mind, he chaptalizes minimally or, depending on the vintage and the cuvée, not at all. The reds are a traditional Burgundy vinification and the grapes de-stemmed– no carbonic maceration here. All of Jean-Paul Brun's red wines use open cement tanks for pigeage, and all natural yeasts are used, with only a minimum amount of SO2 used at bottling in order to keep the wine fresh and "headache-free." (Fermentation naturally produces a lot of CO2, which acts as protection against oxidation during aging; leaving some in the wine at bottling time also helps to keep it fresh.) Filtration is also minimal so that the wine keeps its original fruit and aromas. For the white wines, fermentation starts spontaneously. For the reds, JP Brun uses a pie de cuve rose with a small parcel that he harvests early.

Brun's wines are not "blockbusters" in the sense of being "big." The emphasis is not on weight, but on fruit; this is Beaujolais as it once was, and as it should be. Brun's methods– to make Beaujolais from natural yeasts, to not chaptalize, and to work at low yields- are all part of his effort to restore the Gamay of the Beaujolais as a light, delicate and silky drink. This attitude separates him from most other winemakers of the area. For example, in 2007, two-thirds of his crop was rejected by the Beaujolais bureaucracy for being "atypical" and he had to bottle as Vin de Table. Meanwhile, this same wine scored 90 points in The Wine Advocate and was adored by Beaujolais lovers all over the world. Go figure.