Wonderful as an aperitif as well as a wine that pairs well with butter-poached fish, scampi's, and pasta dishes such as pasta primavera.

Wonderful as an aperitif as well as a wine that pairs well with butter-poached fish, scampi's, and pasta dishes such as pasta primavera.
About Tiefenbrunner Castel Turmhof Winery
Founded in 1848, the Tiefenbrunner Castel Turmhof Winery owes its name to the ancient castle known today as the home of the Tiefenbrunner family. The winery is in the hamlet Entiklar, in the town of Kurtatsch, which is in the South Tyrolean province of Bozen amid the awe-inspiring Italian Alps. Tiefenbrunner produces over 20 types of quality wines, and each bottle receives the attentive care of expert winemakers and owners, Herbert Tiefenbrunner and his son, Christof. Many international awards testify to the quality that results from their generations of experience, with the flagship of Tiefenbrunner being the Müller-Thurgau "Feldmarschall."
Wine grapes have been cultivated at Castel Turmhof for over 300 years, and from numerous historical documents, it is clear that wine growing played a significant role in the economic development of Entiklar. Vines were cultivated here as early as the era of the Rhaetians, and in particular, during Roman times. The "Linticlar estate" is first mentioned in records dating from 1225 AD. A hundred years later, the Cathedral Chapter of Trento was supplied with wine from the estate "auf dem Püche," also known as "mansu a coste," on the orders of the Counts of Tyrol. With the drawing up of a new land register in 1848, the castle name officially became "Turmhof" under owner and winemaker Karl Pardatscher. In 1968, Hilde and Herbert Tiefenbrunner took ownership and set off in a new direction for the winery, with the opening of an outlet at the Turmhof. Wines intended for sale off-premises were now bottled and sold to the general public. Gradually, new markets were developed and production of bottled wines increased accordingly.
View all Tiefenbrunner Castel Turmhof Winery 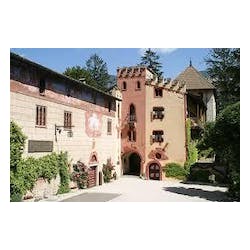