$9.45
The Chelonian has a lovely spicy, cherry like bouquet, bursting with ripe berry flavors. There are delicious notes of blackcurrant and plum with a lingering finish of vanilla and cinamon toast.
Perfect with spicy food, game or beef.

The Chelonian has a lovely spicy, cherry like bouquet, bursting with ripe berry flavors. There are delicious notes of blackcurrant and plum with a lingering finish of vanilla and cinamon toast.
Perfect with spicy food, game or beef.

View all from Tortoise Creek Vineyards 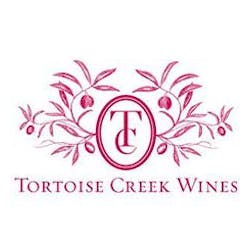 Mel and Janie are from England but are both now US citizens. Mel has been in the wine business ever since leaving school and he met Janie when they were only twelve and thirteen (she played the piano and he played the guitar!) and as they grew up together, they shared a passion for food and wine. They married at 19 and 20. The couple left England to live in France in 1970 and started a company called Master Wines and began selling little known French wines in the USA. Mel was a pioneer in bringing great wine values to the USA from France.

In 1980 Mel and Janie left France and took on the task of opening and setting up all the marketing and PR for the new Jordan winery in Sonoma County, California, and Mel has been credited with the initial marketing success of Jordan. Mel was involved with all aspects of the winery from production to sales and marketing.

After the success of Jordan, Mel and Janie left California for New York and got together with friend Jonathan Waxman (who was the first chef for Alice Waters at Chez Panisse in Berkeley, California) and opened Jams (Jonathan and Melvyn's). It was one of the hottest and most successful restaurants of New York in the 1980s and the first Californian style restaurant. Mel and Jonathan also opened Buds and Hulots in New York and later Jams in London.

Mel started work again in the wine business in 1992 and introduced a line of varietal wines from the Languedoc district of the South of France into the USA market under the label Les Jamelles. He was the first person to start promoting and selling single varietal wines from France. He sold Les Jamelles in early 1996 and two years later began Tortoise Creek.