“Well-suited to the production of concentrated, fruity and spicy red varieties, Puglia is one of Italy’s warmest, most southerly regions. Its entire eastern side is one long coastline bordering the Adriatic Sea. About half way down, the region becomes the Salento Peninsula. This peninsula, bordered by water on three sides, receives moist, nighttime, sea breezes that bring a welcome cooling effect to the region, where little rain creates a challenging environment for its vines. In fact, the region is named for the Italian expression, “a pluvia,” meaning “lack of rain.”
Puglia’s Mediterranean climate and iron-rich, calcareous soils support the indigenous Primitivo, Negroamaro and Nero di Troia. Primitivo produces an inky, spicy, brambly and ripe red wine whose best expression comes from Manduria. Nero di Troia produces tannic, rustic reds from Castel del Monte DOC while Negroamaro, typically blended with Malvasia nera, plays a large part in may blends made throughout the peninsula.
Puglia produces a small amount of white wines as well, predominantly made of the fruity, Trebbiano Toscano, or light, Bombino bianco grapes.”-Winery Notes 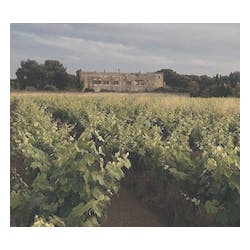 Each of the names of the Varvaglione 1921 labels has a reference to the family or to the land. The name "PAPALE" is a tribute to the territory and its history. In the DOP area of Primitivo where the company is located, there is a district used for the cultivation of Primitivo di Manduria and its name is Contrada Papale.

From the carefully harvested grapes in this area, "PAPALE" wines are born, the most historic and representative labels of Varvaglione 1921. In turn, this land takes its name from the most recent of the three Apulian popes elected so far: Pietro Francesco Vincenzo Maria Orsini (1649-1730), named Pope Benedict XIII on July 4, 1724. In fact, at that time he used that same plot of land to produce a Primitivo wine for himself. Even after his election, he wanted to maintain the local winemaking tradition, which has been handed down to the present day and which today is symbolized by the "PAPALE" wines."