Tasting Notes
Expressive floral tones of wild rose, fresh berries, and crushed mineral. The power and intensity of the bouquet is especially attractive and bold. The wine’s dark concentration within layers of blueberry and earth is perfectly balanced by those ethereal aromas. 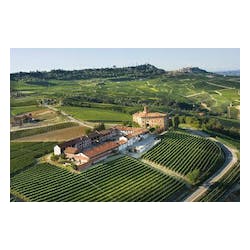 Viberti, located in the village of Barolo in the northern Italian region of Piedmont, was founded in the early 20th Century by Antonio Viberti, an innkeeper and restaurateur. Wine was produced from the estate vineyards exclusively for the patrons of the family restaurant, Trattoria al Buon Padre.

In 1967, at a time when Barolo wines were gaining international notoriety, Antonio's son, Giovanni, joined the family business and realized the potential of the estate vineyards to produce superior quality, world-class Barolo. After selling wines to restaurant patrons, who came from far and wide to enjoy the local cuisine, the reputation of Viberti Barolo spread leading to demand beyond Piedmont.

One hundred years after the creation of the Viberti winery, the family's connection to their beloved land of Barolo and its fine red wines remains unbroken as the 3rd generation of the Viberti family, GianLuca and Claudio, joined their father at the winery after completing their studies at the prestigious Scuola Enologica in nearby Alba. Today, under the direction of Claudio Viberti, the winery produces varietally accurate, elegantly-structured wines with fresh fruit aromas, bold tannins, and vibrant acidity that are approachable upon release, yet reward extensive cellaring.

Viberti's 20 hectares of estate-owned vineyards are planted to Nebbiolo, Dolcetto, Barbera, and Chardonnay. Located predominantly on the western facing slopes of the village of Barolo in the DOCG appellation, altitudes range from 400-500 meters above see level. The Estate includes three single vineyards: Bricco delle Viole, San Pietro, and La Volta, select parcels of which are designated to the production of Barolo Riservas in only the finest vintages. Strict pruning of the bunches occurs twice annually in an effort to reduce the yield per hectare, allowing only the finest fruit to fully ripen.

In recent year, Viberti acquired three additional prestigious vineyards in Barolo: Terlo, Albarella, and Ravera. Currently, their fruit serves as a welcome addition to the Viberti wines, but will ultimately produce Grand Crus as the vineyards are cultivated to fully adhere to the strict viticultural standards of the winery over the coming years.

Viberti uses a combination of state-of-the-art equipment and traditional winemaking techniques. The winery has employed the use of roto-fermenters – horizontal stainless steel tanks which consistently churn the juice and skins throughout vinification – eliminating the need for antiquated methods such as punch-downs and pump-overs. This modern technology has decreased fermentation periods, but the wine is still extensively aged in traditional large vertical barrels called tini made from steamed oak, not toasted. By minimizing the influence of oak, maximum fruit expression is achieved.