View Cart / Checkout
Loading... Loading cart
Total:
—
View Cart / Checkout
0
Cart
Delivery
Search
Menu
Home » Wine » Red Wine » Rhone Blend Red » Vidal Fleury Cotes du Rhone Rouge 2017
Sample Image Only
Vidal Fleury Cotes du Rhone Rouge 2017
Ship "12" Free when you mix or match a 12 bottle case! more...
Vidal Fleury Cotes du Rhone Rouge 2017 ships free when purchased by the 12 bottle case! — Fill a 12 bottle case with this item or any of our other eligible free shipping items, and that case ships for free! Note that there is no limit to the number of cases you can have shipped for free so long as they are filled with eligible "Ship 12 Free" items.
65 Grenache, 20 Syrah, 10 Mourvedre, 5 Carignan
Sustainable... Ruby red in color. A nose dominated by notes of cocoa, cherries, and spice. On the palate, the wine is bold with blackcurrant, cherry, and roasted nut flavors. ~winery notes

Founded in 1781, Vidal-Fleury not only is the Rhnes oldest continuing grower/ngociant firm, but it also secured an international following very quickly.Thomas Jeffersons visit in 1787 was its first contact with the United States; he called the wines  ... read more
12 Free
Item Sold Out

During the 1890s, Gustave Vidal married a daughter of the Fleury family. Thanks to her dowry, they replanted the vineyard following the phylloxera outbreak. Then, in the 1920s, the House took an interest in other wine-growing regions throughout the Rhône Valley (See Line Extensions).

In 1984, Ets. Guigal acquired the company. This step was a logical continuation for the Vidal-Fleury and Guigal families, who had always worked together. Indeed, Etienne Guigal (Marcel's father) was hired as a vine-grower and cellar master by Joseph Vidal-Fleury in 1924. When the Vidal-Fleury family decided to sell the House, as none of its heirs felt like taking over the reins, it naturally turned to the Guigal family. As result, the company remains family run. Vidal-Fleury is managed in absolute independence with its own winemaking, logistics and commercial team.

In 2006 Vidal-Fleury began investing to modernize its winery facilities, installing state-of-the-art technology; in 2008, it built a new cellar specifically dedicated to maturing the wines. In addition, Vidal-Fleury's vineyards are overseen with 100% self-sustaining management practices.

Long considered one of the most respected producers in the Rhône Valley, Vidal-Fleury carries on under the watchful management of Head Winemaker Guy Sarton du Jonchay.
View all J. Vidal Fleury 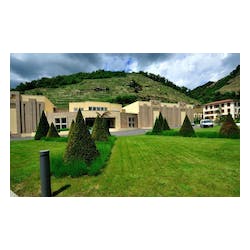