Ship "12" Free when you mix or match a 12 bottle case! more...
Vina Robles Estate Cabernet Sauvignon 2019 ships free when purchased by the 12 bottle case! — Fill a 12 bottle case with this item or any of our other 400+ eligible free shipping items and that case ships for free! Note that there is no limit to the number of cases you can have shipped for free so long as they are filled with eligible "Ship 12 Free" items.
Wine Enthusiast 94
This is a rich and thoroughly satisfying Cab, starting with aromas of roasted boysenberry, cocoa, violet and toasty oak on the nose. The palate is cohesive and neatly woven, with rich black fruit, mocha and espresso flavors that are wrapped in firm but balanced tannins.

Wine Enthusiast 94
This is a rich and thoroughly satisfying Cab, starting with aromas of roasted boysenberry, cocoa, violet and toasty oak on the nose. The palate is cohesive and neatly woven, with rich black fruit, mocha and espresso flavors that are wrapped in firm but balanced tannins.

The fruit for our 2019 Cabernet Sauvignon was selected from two of our estate vineyards in Paso Robles Huerhuero and Creston Valley. Huerhuero Vineyard, in the hilly terrain between the El Pomar and Geneseo Districts, benefits from the
moderating Pacific breezes that blow through the Templeton Gap in the afternoon as well as its limiting calcareous subsoils. Creston Valley Vineyard has picture perfect high terrain, southern exposure and shallow soils with noticeable granulated limestone. Both of these vineyards produce Cabernet Sauvignon with an overall balance of expressive flavors and structure.

All the blocks were handpicked and sorted in the early morning to ensure quality and uniformity of ripeness. The fruit was further sorted at our state of the art winery, gently destemmed, optically berry sorted and crushed into temperature-controlled
stainless steel tanks. Pumpovers took place regularly to enhance color and help extract tannins from the skin. After pressing, the wine was racked into barrels to complete malolactic fermentation. While the majority of wine was aged in French oak, we also used some American and Hungarian oak barrels for added nuances and complexity. After 8 months of aging and extensive blending trials, a bit of Petit Verdot was added to enhance structure. The final blend was then aged in barrels for an additional 12 months to fully integrate before bottling. 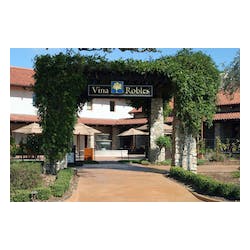