View Cart / Checkout
Loading... Loading cart
Total:
—
View Cart / Checkout
0
Cart
Delivery
Search
Menu
Home » Wine » Red Wine » Shiraz / Syrah » Vincent Paris St. Joseph 'Les Cotes' 2020
31%
OFF Sample Image Only
Vincent Paris St. Joseph 'Les Cotes' 2020
$41.99 $28.95
Ship "12" Free when you mix or match a 12 bottle case! more...
Vincent Paris St. Joseph 'Les Cotes' 2020 ships free when purchased by the 12 bottle case! — Fill a 12 bottle case with this item or any of our other eligible free shipping items, and that case ships for free! Note that there is no limit to the number of cases you can have shipped for free so long as they are filled with eligible "Ship 12 Free" items.
Vinous Media 92
"Dark magenta. Spice-tinged red and blue fruit and allspice qualities on the nose, along with suggestions of candied flowers and olive. Smooth and open-knit, offering vibrant boysenberry and bitter cherry flavors that deepen and become sweeter as the wine opens up. Shows fine definition and spicy persistence on the finish, which features velvety tannins and lingering florality. Raised in an even combination of neutral oak barrels and stainless steel tanks."~Josh Raynolds

"Vincent Paris is a native of Cornas and his first vintage was 1997. He made his first couple of vintages with his uncle, legendary Cornas vigneron Robert Michel. This fine St. Joseph hails from a biodynamic estate-grown plot of 25 year old Syrah vines. Vincents wines exhibit power, yet possess a determined freshness and elegance to them, and he is without a doubt one of the stars of the Rhne Valley. With refined aromatics, mouthwatering purity of fruit, and fine grained tannins and finesse, this beautiful St. Joseph showcases why Vincent Paris has moved into the upper echelon of vignerons within the Rhone Valley."~Distributor Notes
About Vincent Paris
"Vincent Paris, whose first vintage was 1997, is as shy as his wines are bold. In his early 30's, he has retro sideburns, but not much else in the Cornas appellation's new star is "retro". Vincent's uncle is Robert Michel, one of Cornas' finest growers. He made his two first wines with his uncle then, seeking autonomy, rented facilities for the vinification of his most recent wines. He is in the process of building his own winemaking facilities with a courtyard that holds his apricot plantation.

Vincent Paris, co-president of the appellation of Cornas with Jacques Lemencier, owns 6 hectares of vineyards and produces about 2,500cs per year of which 1,600cs are Cornas. He inherited most of his own vines from his grandfather (some of which are 90 years old) and has also rented some vines from his uncle. Vincent's total rented and owned holdings amount to 8 hectares. They are located at different places primarily along the southeast facing Cornas slope and a small lot in St. Joseph.

He prunes to only four bunches of grapes per vine (the norm is between five and seven) which concentrates the vines' growing power and cuts down on the need for green harvests. He ferments at relatively low temperatures and matures his wine in oak barrels for up to 12 months.

Four years ago he planted Viognier and Roussanne in AOC Cornas, on north-facing slopes he considers better suited for white than reds, despite the fact that in so doing he must sell the wine as Côtes du Rhône since there is no AC Cornas for white. The cuvée is 2/3 viognier and 1/3 Roussanne. 20% of the cuvée is vinified in new barrels, the rest in tank.

The Cornas Granit 30 and 60 designations refer to the soil, the approximate age of the vines, and the slope on which they are planted. The Granit 30 is concentrated black fruit in a relatively "consumer friendly"style – perhaps a bit more Syrah-ish than Cornas-ish, whereas the 60 is classic Cornas – dense, aromas of kidney and iron, with a terrific mineral underpinning. His St Joseph red is made from 10 and 20 year old vines, and is vinfied 2/3 in barrel and 1/3 in tank."
View all Vincent Paris 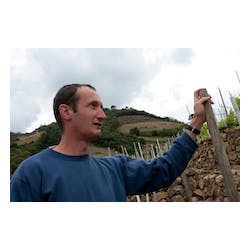 No questions posted yet about this item.
Posted byPeter on Jul 20, 2022Verified Purchase
Subscribe to our newsletter!