Winery Notes
Beautiful. Aromatic. Layered. A bouquet of blossoms. Tangerine, apple, pear and wisteria right to your face as Italian melon, Gala apple, clove and lemon meringue soothes your mouth. A delicate cascade of mineral washes over the palate. Complex and complete as you swoon with satisfaction.

Winery Notes
Beautiful. Aromatic. Layered. A bouquet of blossoms. Tangerine, apple, pear and wisteria right to your face as Italian melon, Gala apple, clove and lemon meringue soothes your mouth. A delicate cascade of mineral washes over the palate. Complex and complete as you swoon with satisfaction.

Vineyards
Frenchman Hills (33): This vineyard was planted in 1998 and is about a 30-minute drive north of the Wahluke Slope, which is one of the warmest areas in the Columbia Valley. However, Frenchman Hills Vineyard is a cooler site, partly because of its higher elevation at 1650 feet. It also does not easily frost, and has limestone and broken basalt soils at the top of the vineyard.
Roza Hills (32): At an elevation of 1350 feet, in a natural southern sloping bowl that sits on the southern slope of the Rattlesnake Hills, Roza Hills was planted in 1977. The majority of the vineyard is planted in a loamy silt to chalky soil with broken basalt chunks interspersed.
High River (28): Located on the east side of Columbia River, High River has sandy soil with volcanic rock and a temperate micro-climate.
Moxee (7): Planted in 1973, Moxee is located east of Yakima and north of Moxee. The west facing slope is about 1450 feet elevation. The soil is Moxee silt loam with broken limestone.

Production
Yield: 4.5 tons per acre
Yeast: native
100 whole cluster pressed 100 barrel fermentation
25 new French oak barriques 11 months barrel-aged on lees
About Wine Of Substance - Charles Smith
Growing up just outside of Sacramento, California, in the foothills of the Sierra Nevada Mountains, Charles Smith began craving worldly travel at a young age due to his Welsh mother and French father. His wine journey began as a nomadic restaurant, spending winters in Palm Springs and summers in Lake Tahoe or Napa Valley from the ages of nineteen to twenty-nine. This period of his life became a catalyst for his passion for wine. In 1989 Charles decided to move to Denmark (for a lady friend he met in the states). While in Scandinavia, Charles spent the next nine years managing rock bands and concert tours throughout Europe, including the famed Danish duo, The Raveonettes. Wining, dining and hard partying while on the road ultimately triggered the career he has today.

Charles currently resides in Seattle and Walla Walla with his daughter, Charlotte.
View all Wine Of Substance - Charles Smith 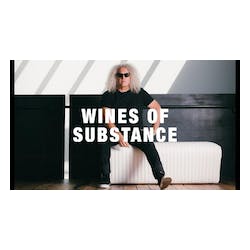